I am writing this because you are clearly trying to start a personal war with many Americans. You have crossed the line and this is why I simply cannot vote for you.

There are many topics that you have discussed with the public that I disagree with, and I could sit and argue with people til the cows come home about things such as taxes and employment issues but I’m not going to do that. I’m only going to address issues you are creating and would be creating should you become President and Vice President. Mainly, because it blows my mind to know your way of thinking, if elected, would set back us back. By “US” I don’t just mean women, I mean human beings as a whole and by “set back” I mean like 50 years back.

I thought I should write you because I think you’ve become confused. I’ve gathered that you and your BFF Paul Ryan, think running for President and Vice President, is a synonym for God.

Let me just start in by asking-What the fuck is wrong with you? Seriously. Your stance on a woman’s right to choose-You seem to think you have the right to tell women what they can do with their own bodies. Have you lost your damn mind? I am not even going to go into great detail about what you plan to do with and have already done in regards to contraception and abortion rights. It makes me want to vomit. But let me just ask you both, you think by making abortion illegal, it’s going to stop it? No, that just means there are going to be illegal (and shady) abortions.

So, let me clarify for you, you don’t get to tell me what to do with my body. Neither of you are God, nor is running for the title of President and Vice President also referred to as God. You think you can simply preach about your beliefs and YOUR way of life and disregard others if their belief is not the same as yours? That is is just mindless and ass backwards.

Why don’t you just revoke a woman’s right to vote while you’re at it? What we as women believe is best for us as individuals is something you already want to take away from us, so why stop there?

I don’t know which one of you is worse, you Governor, or your running mate Ryan.

At times I think it’s Paul Ryan. Ryan, you like to refer to your children as “Bean,” which is funny because that is what I’ve nicknamed my clit. But you see, Ryan, contrary to what you might think, we are not on complete opposites of the spectrum on this. Our “Beans” are both precious things to us so I should have the right to decide what to do with my “Bean” and things connected to it, just like you have the right to do what you want with your “Bean.” …..as you should-WITHOUT JUDGEMENT.

Oh and by the way, Ryan, a “bean” is not a baby, as you referred to it. It is a seed, something that is planted with the intent of producing life-not already so. It baffles me that you both are trying to simplify something that is a really complex and deep issue. It is not as simple as black and white and even with your so called “exceptions”, you are still completely clueless.

Even though it may be likely that the decision of legalizing abortion won’t be overturned should you take office, it doesn’t mean we wouldn’t have to suffer your attempts to overturn it, which is horseshit.

It disgusts me to no end to have to actually hear the ignorance and intolerance spew from your mouths when it comes to these issues. But see the good news is, when Obama gets re-elected you, Romney and Ryan, WILL have the right to… Go fuck yourselves, (or each other which ever you prefer) then if one of you get pregnant, you would have the right to abortion. See? Options!

And just as I think Ryan might be slightly worse, Romney, you remind me and end up neck and neck with him in the race for title of “My Worst Nightmare,” when you talk about marriage equality. You say same-sex marriage is not American. Really? Romney, how ’bout you not try to tell me what is American when it’s not American that you don’t even want to address… 47% of Americans! You know what is also not American? Those who judge others. And since you want to integrate church and state so badly, FYI, judging others IS also a sin. So shame on you TWICE!

We have fought and made great strides forward and you clearly want to take steps backward. When it comes to a woman’s right to choose, and marriage equality, you and Ryan want to take that right away from women, and you want to fight to keep same-sex marriage illegal. I think you forgot God said “Love each other as I have loved you.” 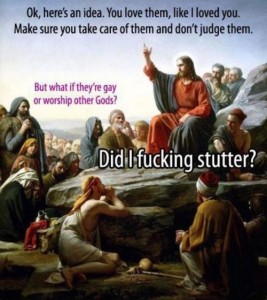 It is not your job or your place to judge others, solely God’s.

See, Gentlemen, you have the right to believe in whatever you’d like. What you fail to see is that you cannot impose your religious beliefs on everyone else and try to cover it up by saying it’s what is best for America. You do not have the right to decide what America’s version of being American is when you distinctly don’t know yourselves.

I’m not voting for two people that are so closed-minded, they can’t see over their own beliefs for the greater good of American people. The beauty of this nation is diversity and freedom…and you, Sirs, are trying to take that away from us. God help us if you get elected.