Living downtown has brought on some new, fun, and just plain awesome adventures. Including meeting some incredible people…with some incredible, or maybe, not so incredible new ways of working out.

Well one of them-

Laura …what can I say about this girl?  Other than, when I met her, within 5 minutes she had me cracking up. She might just be one of the only girls I know funnier than me.  She didn’t waste any time, when we met..she just started telling me some of her life stories which just happen to be hilarious… and I couldn’t help it, I was all ears. She’s living, and doing it right, so of course much of that comes with some funny stuff. Glad I met her until she mentions this:

On top of Laura’s stories, she’s got some crazy ideas for working out. BIKRAM YOGA. When we first met she said: “You should try Bikram with me. You feel like you’re going to have a heart attack but afterward you feel great!” Sounds uber appealing at this point right? Yeah, so my response: “Ummm, I think Bikram has boiled your brain..I’m not doing yoga in a heated room” (over 100 degrees heated) . 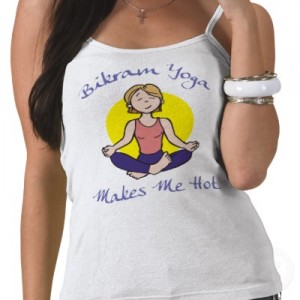 I hate the heat..like I don’t even lay out much because I not only get bored, I get irritated. So how was I going to go into a heated room and do yoga on top of that?

It took some convincing, but she made it sound awesome so I figured why not? I could always walk out of the class if I couldn’t handle it.

The night before…..I’m given INSTRUCTIONS on how to get ready for this class:

“Get a large jug of water, freeze half, chill the other half, tomorrow morning, fill the frozen jug with the chilled water…it gets warm in class ya know?”

“Bring a hand towel, and wear as little as possible”

OOOOkaaay, instructions, really? I sure didn’t think I had to think that much about what to do before hand..but I understand as it prevents you from DYING in yoga.

We get in, put our things away and walk into the studio.  She opens the door, and the heat hits me, sort of stepped back for a bit, but played it cool..I didn’t want to look like a newbie.

I’m looking around the room, everyone is wearing next to nothing…literally. There was a guy in front of me wearing what looked like a banana hammock. ..hmm, interesting. One girl looked like she was just wearing her underwear. You’d think that’d all be awkward, but no one cares. It’s so hot in there, you lose the brain capacity to even judge or make fun of people..

Well so much for not being found out. The instructor calls out my name and points out that because I’m new to the class, I should not try everything everyone else is doing. So when she says “push it” she’s not talking to me.

I did like the fact that she spoke to me before the class, so I wouldn’t feel like a loser if I couldn’t keep up with everyone.

We start the breathing exercise.  It’s not even 30 seconds in and I start sweating…big time…but I just go with it.

The poses are not very hard in Bikram..so don’t be intimidated when you see this: 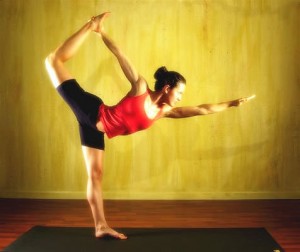 Or..if you happen to glance over and see your neighbors ball sack. (Sorry I don’t have pictures of that, cameras aren’t allowed in yoga)

3 poses in, you are already dripping in sweat. Only then, are you allowed to drink water which the instructor playfully calls “Party Time”…well it’s a very short party. You get right back to posing.

The heat is all you can think of really, not ball sack guy or anything else. You just focus on your breathing so you don’t get light headed. There was a point I reached where I thought: “I just might die here today”, but it passed very quickly.

Tree posing, Savasnas, and everything in between. It’s over before you know it. You come out feeling a little delirious but I guess according to Laura is “A good thing”

The instructor said I did great for my first time and whether or not that was a sales technique, I had decided then I’d be back for more.

It’s great for detoxifying your body, and of course increases your flexibility, and over all it really wasn’t that bad…and that’s coming from a girl who is not a fan of the heat. It’s different in there…as in some situations where the sweating is ALL GOOD ;), this would be one of those.

Would I recommend you try this? Oh yeah.  You do feel awesome afterward…and you won’t pass out. Well, actually I shouldn’t say you won’t but you should be ok as long as you hydrate before the class and don’t freak out at how hot it gets.

It’s NOT for everyone…but I do recommend you try it. If you don’t like it, then don’t do it again, but at least you can say you tried…and that’s what life’s about anyway.

← Cynicism At HER Finest
“I’ll Be Single Until FOREVVVERRRR” →

3 comments for “If You Can’t Take The Heat, Get Your Ass Out Of Bikram Yoga”