I started to think more about this theory of actually being open to a relationship with someone and all of a sudden, I didn’t feel so good….

Now, I’m not talking about really getting the runs…because for the record, women don’t do that…we don’t poop,or burp, or fart…

Has that ever happened to you? Has the thought of a relationship ever sent you running, not just from it but maybe running to the nearest bathroom?? 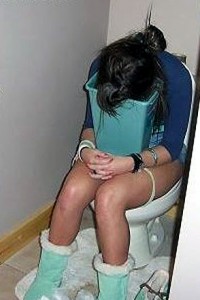 I think it’s more typical for people to think of the term “relationshit” as their once good relationship turns bad but what about feeling sick BEFORE you even get to the relationship part?? The more I thought about it..the more nervous I started to feel, and slightly nauseous …because I started to get flashbacks of my one long relationship, and thought, if I was open to entering one now with someone new, would it be the same?

These are my confessions.

I consider myself a very courageous person but I believe, courage is the direct result of facing a fear in the first place.

It’s been YEARS since I’ve been in a relationship. I am truly selective about who I spend my time with and my next boyfriend will be someone I’ve considered marrying down the road..that’s how serious I take the “boyfriend/girlfriend” title.

In getting to know the guy I’ve been on several dates with, the conversation I was trying to avoid surfaced… “When was your last relationship?”

I thought about not asking at all. I mean, who really wants to know, even though I was slightly curious. When it came up, all the scenarios started to pop up in my head: “I am divorced, never had a serious relationship, I have 3 children from 3 different baby moms”

Then he said it… “I was in a relationship for about 10 years, that ended a few years ago” Holy shit. I didn’t know what to think, I mean, that was me…my situation. I was with someone for about that long. About that time ago.

I was all of a sudden brought back to my major relationship. I, for so long had been the girl who was with someone for years. No one I have dated, has had any situation like that. So I was left wondering, was he in the space I was? Was he feeling nervous at all about dating leading to a relationship? I thought he had to be because no one comes out of a long term relationship like we both had, without being changed by it….

When I fell in love at 19, it was easy. I was his first girlfriend, there was no one else before me. Interesting that as we get older, it’s not always so easy. I guess it’s only the natural progression of life, that people will have had other relationships at our age, and would now probably be a red flag if at this point they hadn’t.

We have a lot in common but I didn’t expect the length of our past major relationship to be one of them. I didn’t ask but I wondered. I wondered if he had experienced any of the things I did during my relationship and did he ever feel like running from new relationships?

Had he lost himself in his relationship like I did mine??

Losing myself happened rather quickly. I got so caught up in his world that I forget who I even was…well, let’s face it, at 19 I didn’t know who I was but instead of trying to create myself, I tried to create what he wanted… which in the end I never did a good job of anyway…must have been the inner rebel in me.

Had he lost passion in his relationship like I had in mine?

My ex and I became more like roommates than lovers. We never went out on dates once we got comfortable. I am NOT comfortable with comfortable! I want to keep things fresh in sexy even years from now. That ties into romance. I NEED that. My ex and I didn’t have that.

I’m not really afraid of monogamy, I’m afraid of monotony! I’m afraid, as I see so many couples, as it happened to me, that the “dating” part stops. Next thing you know every single weekend is spent in your pajamas, your skin begins to turn pale from getting no sun, and you possibly most definitely allow yourself to get FAT! That didn’t just happen to me right?…RIGHT?! This shouldn’t happen…but don’t lie, you’ve seen it, and maybe you’ve experienced it, without even knowing it’s happening. These fears have actually sent me running in the other direction at times because I feel since that one major relationship, I have been happier alone.

In speaking of my one long term relationship, I want to make it clear that my ex was not a bad person. He was a kind and caring person. It just takes so many different people to make up this world and what I needed may not be what someone else needs and that’s why people break up and those same people work better with others.

Because I spent years being so involved in his world, I feel these last few years, I have been making up for lost time. Going on adventures he would have never taken me on, and just being happy in ways I couldn’t be with him. The idea of losing that freedom again, scares me to death because so many times you fall in love and not even know what happened…to you.

I was left wondering if any of those scenarios had happened to this new guy when he was in his long term relationship.

Falling in love does not scare me. Falling out of love does….Being with the wrong person does. I have this reoccurring dream that I am being forced to get married. I don’t even know the guy and my parents and family are literally pushing me down the isle toward him. I am yelling “I don’t love him, I don’t even know him!” and all they keep saying is “It will be fine, it’s OK, you’ll be OK.”…oh and every single time…I’m in some HORRIFIC 70’S wedding dress. YUK! I always wake up with my heart racing.

Even in over-analyzing for the sake of this blog and thinking about relationships…it’s not just about what he will give to me, I want to make sure I am wonderful to that guy as well. Guys seem so much easier but I want to make sure I give him everything he wants and needs. I’m hoping that’s just food and sex right?

It all turns my stomach into knots. Committing isn’t the issue, it’s who I become after I do. How do I find the balance? How do I remain aware of how to keep “me” as a priority? I know I eventually want to face this simply because the feeling of being in love was wonderful despite the ending of that one huge relationship. I know I can have that feeling again, better even. I guess the only thing I can do is be who I would want to be with in a relationship. Give him everything and hope he wants to do the same with me, not punish him for my past, or judge him for his, and only focus on treating each other well. The biggest obstacle for me is getting to the actual relationship part…which I will in due time…and will possibly buy enough Pepto-Bismol to deal with the side effects of the journey in the meantime.