*DISCLAIMER** This is MY interpretation of this date. My readers have also gotten to know Single Steve…and admire his blog. Though our date did NOT go well, please refrain from saying mean things etc. I’m sure he’s still a good person…or whatever.

Chapter 14. A Leprechaun and Sasquatch

I’m 5’8″ I embrace my height….but, I have these boots, and they put me quite a bit taller. I love it. They are sexy and I rock them like no one’s business…apparently Single Steve does NOT like this.

So here we go, on to our first date.

I walk out to him, and greet him.

I go to give him a hug and he says:

“Wow, you ARE tall” I got it, right then…he looked scared. “Is my height a problem? Great…is he shaking??” I thought.

that he didn’t even open the door for me for….

This is going to be interesting. I mean, I’m not that TALL right? I get it Lucky the Leprechaun, you can’t handle this tall drink of water… 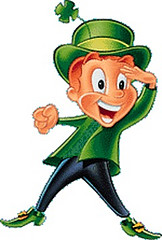 I knew it wouldn’t take long before I would be chewing this guy up and spitting him out.

I didn’t care about the fact that he was shorter than me, until he brought up my height..I could have saved us both some time and brought out a box of Lucky Charms. After all, they ARE magically delicious and isn’t that what Leprechauns like to eat? I decided to go anyway…hoping maybe in the back of his white panel van, would be a nice pot of gold and he would use some of that to take me on a nice date.

He said we were going to Subway…I don’t know if he was joking or not…but I quickly said no and told him to take me somewhere else. Thankfully (for him) he did.

Now we are at a nice place with a view…but he’s not over the height… “How tall are you?”

So those that know me, know once I’m done, I’m done…just like with the date in New York…there was a point, I got so bored, I fell asleep on my date..literally on him…and drooled…yeah I said it..drooled..Now, NORMALLY, I would have been embarrassed but all I said was “oops, my bad” because I just didn’t care anymore.

Same in this case. I didn’t really care if he liked me or not at that point…so I took his food. I didn’t ask, I was just like “btw, I’m gonna steal your food” and I pulled his plate toward me http://tweetphoto.com/10444702 I may have even chewed with my mouth open. Fuck being classy!

He started talking about his life,his job, his dating, I kept interrupting him as I had already lost interest.. He probably thought I was a bitch..oh well.

While I was doing that and leisurely checking twitter and facebook, I saw some of his tweets:

“By the way, I’m going to steal your food”

“Dinner was delcious. She keeps checking phone, I think she’s talking to her other boyfriend. ”

“Turns out she’s a foot taller than me. #sasquatch ”

Wow…well you know what shorty, don’t be mad at me because Milk did MY body good and we needed to ask the waiter for a high chair for you ok?

Dinner was brief. When we left. I said “Well thank you for dinner anyway”

He responded with “Thank you for being a giant!”

REALLY!? WHAT THE FUCK EVER DUDE! I should have been the one driving. Isn’t there a certain height requirement for YOU to be OUT of a car seat?

When he drops me off…I gracefully thank him…. and as I’m getting out..he throws on some Mariah Carey, “Why You So Obsessed With Me” TURNS IT UP SUPER LOUD..points at me…and speeds off…all while some of my neighbors watched…I jolted upstairs, ran inside my house hoping no one saw me, as to avoid embarrassing questions later…

I got inside barely got on my computer to see that he wasted no time and posted these few tweets:

“Headed to Millers Field, hope to meet a girl that’s not a giant. Drinking my sorrows away.”

Are you fucking joking me!? He acted like meeting with me was something out of Attack of the 50 Foot Woman OHH THE MONSTROSITY! I’m 5 feet 8 inches..not 50 feet dude! 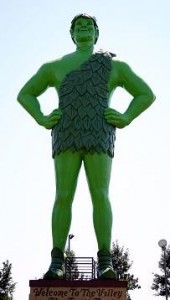 Stop.whining. Steve. I’m not that much taller than him. I think he’s just mad because I didn’t want to make out..and I said “Well if you can reach me, you can kiss me”….he couldn’t.

← The Mexican Guido Speaks!
My Do’s and Don’ts of Online Dating. →

13 comments for “Chapter 14. A Leprechaun and Sasquatch”