“War, what is it good for?” -Edwin Starr

In war, there is typically a victor but when it comes to the battle of sexes, is there? I was in deep thought the other day realizing how far we have come as women, and yet in certain areas, we are still not equal, and still have yet to be victorious. When it comes to equality with the sexes, particularly in sex, do we raise the white flag or continue to battle?

It’s pretty simple, we’ve managed to make our mark in society. We run businesses, we run for office, have fought for equal pay… in short, our proverbial dicks in many aspects have become bigger than a lot of men’s.

So why when it comes to the area of sex why is there still a double standard?

This, along with other topics in the dating world can often stir up serious controversy and at the end of what can even become a shouting match,the only real end to this debate may be to agree to disagree.

I honestly think the fight to be equal in that sense may be futile, and for more than one reason.

I don’t think a woman should be judged for sleeping around but this is such a complex issue because there are many variables.  For one, because woman are so complex, when it comes to what we will accept and then expect, there often times is no real compromise, thus setting the Women’s Movement…way back.

It’s tricky because we want to be able to sleep around and still be treated like ladies. I don’t see anything wrong with that..but how realistic is this?

It seems as time has passed, women have become less traditional, yet expecting men to remain traditional, oh but only in certain areas, and they need to know what those areas are right?

Wrong. Why is that ok? I believe in this area, we should just let the sexes be. In a world where we want gentlemen to remain gentlemanly, is it wrong to skew the perception of what a lady is to a man?  We, as women, have worked so hard to be equal in society, yet we still want certain things from a man. Do we honestly have the right to draw a line on our progression? Do we have the right to put pressure on men and have them have to know where we want to be independent and where we don’t?

Granted, there are no “rules” and what is acceptable to one may not be acceptable to another. I know it depends on the individual.  As an example there are men out there that are ok with women that have been around the block a few times. It comes down to not judging their past.

My point is that we do not have the right to impose such standards on men. We believe if the guy asks us out, he should pay, he should be chivalrous, and well, a gentleman and then expect them, then, not to turn around and have certain expectations of us? No, not fair.

So if we could get past what is expected or not expected of us, and be what men would like ladies to be (whatever that version is)…do we we finally win the battle? No, because there is a much bigger enemy out there, and ladies, that enemy, is much closer to you than you think…..

And let’s not forget the ever so endearing “C U NEXT TUESDAY”.  All simple yet effective words…kind of like a handshake. Saying that to a girl or doing what many women do and saying it ABOUT a girl gets your point across.  We all, myself included, in the midst of anger, have been guilty of taking that cheap shot by calling another female a name or two.

Ladies, when it comes to the battle of the sexes, I hate to break it to you, but WE may just be our own worst enemy….. We may in fact be the reason there are still double standards!

Why? Because we have TWO things working against us. Men pitting women against each other and wait for it…WOMEN PITTING WOMEN AGAINST EACH OTHER! *Gasp* I know hard to believe but it’s true.

Truth be told, men don’t gossip like we do. Therefore, a man will not spend hours discussing some guy he knows who banged everyone in town. Girls on the other hand well….

A man doesn’t have to work half as hard to get a girl talked about, because we are too busy doing it to each other.

Ladies, I don’t know about you but I don’t like being called a bitch or hearing that we “cat fight.” So annoying. 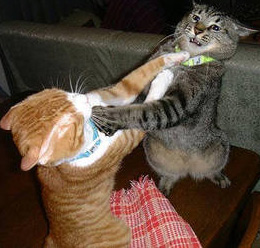 We make it too easy for men. We spend our time putting down other women when our sole focus should be lifting eachother up!

Instead, we can fill our days with tearing each other down with our jealousy over the guy she stole, or how many guys she’s been with, or…just anything. Seems girls will find ANY reason to talk and a lot of  the time, it’s not good….

All the name calling and “cattiness” a lot of times comes back to sex, and when it comes to double standards, we may be the ultimate demise to our progression in this area.

Nobody will ever win the Battle of the Sexes.  There’s just too much fraternizing with the enemy.  ~Henry Kissinger

Exactly ladies, we get so caught up with the other sex that we don’t always see what we are doing to our own.

If we are to make real progress in this area of the battle with  the sexes and the double standard start with YOURSELF. Treasure yourself. I don’t see the name calling and finger pointing to stop anytime soon but it can stop with you. People may talk about you but try not talking negatively about other women.  Spend less time gossiping about your idea of the “town tramp” and focus on lifting other women up! We have to realize that even though the pressure to be great and be ladies is a lot, it’s because we SHOULD be held to higher standards. Men may expect more from us as ladies because we are, simply put, the superior being;)

In case you aren’t sure why we are the superior being, it’s because we have something men don’t…vaginas. Fabulous vaginas, and with that, as I always say, we can rule the world.

So will the battle of the sexes ever really be won? Will there ever be a time where there are no double standards? Sadly just like the question: “How many licks does it take to get to the center of a Tootsie Roll Pop?” The world may never know.

7 comments for “Battle of the Sexes-Double Standards”