I think I’ve discovered a new species consuming our planet.  Seems aliens have landed here, and get this, they don’t talk….they…text, and nothing more.  This baffles me.  Discovering this new species sounds interesting and exciting and you might be wondering what these aliens look like…ready?  They look like every other earthly guy.

The concept of not calling and verbally communicating is very foreign to me, and I have to say, I’m slightly offended that I’ve realized that guys these days will text you all day but they are not really interested in actually having a real conversation with you.  I’m finding that people actually have full on relationships without ever speaking to each other on the phone, and why would you, with a press of a few buttons on your smart phone, you can ask questions and even with an add of the exclamation point, you can tell someone how you feel and they are just supposed to understand…right?

Do these extraterrestrials know something I don’t?? Or is it just laziness?? 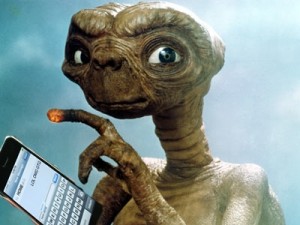 Would the E.T. of today text to “Phone Home?”

In the 4th grade I had a boyfriend. I know he was my boyfriend because he passed a note to a friend, to another friend, who then passed the note to another friend, then to me. The note asked me to be his girlfriend and I replied yes….The day after that, I never spoke to him. We never even looked each other in the face! He would just pass me, and I would pass him but, no words. Come to think of it, we never broke up!

As an adult I laugh at that now, but with all of this technology, maybe I’m not too far off. Maybe these are the types of relationships we are all headed toward.  Think about it, there was the invention of the telephone, now it seems we are moving away from it. To me, that seems a bit backward.  Alexander Graham Bell has probably turned in his grave….several times.  Here was a man creating an avenue to try and connect us, and here we are trying to do everything BUT connect.

I am not a phone person. My friends know this. I will zone out on you in 2.5 seconds if you don’t get to the point. I am however a person who needs communication every once in a while to feel close to someone.

I think most people need that. When you can’t be with the special people in your life everyday, the heart isn’t quite as satisfied with a text as it is with the sound of their voice. A “I just wanted to hear your voice” travels much further with the heart than a text.

And don’t get me started on phone sex…you think it’s better to read their “ooooh yeah” instead of hearing it?? It will take you forever to type all those extra o’s! Let’s not forget autocorrect. Every time I try to type “cock” my damn iPhone wants to autocorrect it to “xoxo”…that’s hot. How can you ever get off like that?! Pick up the phone and do it right!

I may sound like an 80 year old woman but I just don’t know how these kids do it these days.  What I do know, is that without communication, I won’t move forward with a guy. Women fall in love in between their ears, not by texting or sexting.

At the end of the day, all I want is something real, and something fucking normal.

Alright, sidebar….I get it, I’m not normal either…. I can be a total girl, but can turn right around and act like a guy. I can be emotional, yet, turn around and turn it right off.  So is it wrong for me to want something normal when I’m not that?  Well folks, here  is one of my (many) flaws…. my ability to disconnect. I may be thinking of you (girly), but if  I don’t talk to you often…I can then NOT think about you just as easily (not so girly).  I must connect, and stay connected in order to form a relationship with someone…that includes conversation (girl again), or I’ll just direct my attention elsewhere.

So what’s an earthly girl to do? Are these guys who text but don’t call some superior life form that I should study and marvel at as they teach me the ways of the future?

I don’t know about you, but if this is the future of dating….where people are focused on staying disconnected and not trying to connect with each other whether in fear of rejection once connecting, or just so they can avoid commitment all together, I don’t think I want any part of it.  Even E.T. DIED from lack of connection with his loved ones…he.fucking.died people! Only after Elliot showed him love and connected with him was he magically resurrected.

Stop being lazy, pick up the phone, CONNECT!

← You’re a Chicken, a Big Fat Chicken.
When You’re Not His Girlfriend →